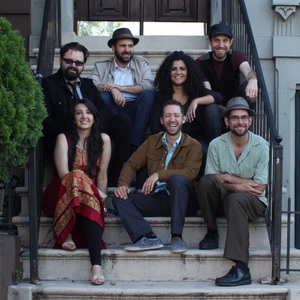 Imagined hybrids from lost empires, the unexpected sounds of Sandaraa ("song" in Pashto) show how Eastern Europe the indus Civilization and Central Asia connect. The melismatic might of modal music and the ringing grit of mountain songs, the rollicking trance beats and restrained emotional intensity, have an eerie resonance, despite ...
surface differences. A magical world of global sounds comes alive when superstar Pakistani vocalist Zeb Bangash joins forces with a retinue of leading Brooklyn musicians led by klezmer clarinet virtuoso Michael Winograd to unlock the musical secrets and history of their regions steeped in ecstatic mysticism, war, migrations and ancient cities lost to the sands of time.​

Michael  and  Zeb  discovered this unheralded affinity between their traditions by chance at a shared gig, but have purposefully crafted the eureka moment into an adventuresome project to explore trans-Eurasian sonic possibilities. Taking inspiration from legendary artists such as Sabzal Saami, Beltoon, Haji Saifudin and more, Sandaraa infuses their own personal styles and vocabulary to expand upon the music. Each band member adds his or her own musical history to the mix creating a signature sound that captivates audiences and fascinates listeners with their unique and inspired approach to musical and cultural synthesis. Through the support of the Center for Traditional Music and Dance, Sandaraa has received major grants from the prestigious MAP Fund, Chamber Music America, and Puffin Foundation.

Zeb and Michael are joined by a stellar group of Brooklyn musicians. Accordionist and keyboardist Patrick Farrell is known in Klezmer, European and new music circles for his virtuosic technique and sonically wide palate. Violinist Eylem Basaldi hails from Istanbul, and is a master of Turkish and Arabic styles. Guitarist and Oudist Yoshi Fruchter is equally comfortable in Jewish music and Heavy Metal settings. The band’s newest Brooklyn resident, David Lizmi ( George Ezra, Ms Mr, Moroccan Band Innov Gnawa) brings his creative and versatile bass patterns. Known for his work with Chick Corea, Herbie Hancock, Esperanza Spaulding  and more, drummer and percussionist Richie Barshay, with a keen ear for musical aesthetics and diversity, holds down the groove in SANDARAA.

A Hybrid in Common: How a Pakistani Pop Star and Brooklyn Clarinet Whiz Got Baluchi, Pashto, and Klezmer Sounds to Dance Together as Sandaraa

“There are shared languages between people and cultures you wouldn’t think have much in common,” reflects clarinetist Michael Winograd, half of the duo driving Sandaraa (“song” in Pashto). “We’re going for whatever helps us understand the music and songs,” adds popular Pakistani singer and composer Zeb Bangash. “We want everyone to share that experience.”

Reeds and oud, drums and violin all weave around Bangash’s sometimes subtle, sometimes bold voice. The styles, scales, timbres, and ornaments are inspired by some of Pakistan’s oft-ignored yet musically vibrant places, the provinces of Baluchistan and Khyber Pukhtunkhwa. Yet it’s in these places where Bangash and Winograd found a sustained creative meetingpoint, one that yields both upbeat party-friendly sounds and slow-building drama.

American audiences will get to savor both on Sandaraa’s eponymous new recording (release: May 8, 2016) and on the band’s East Coast tour.

Bangash and Winograd met when Bangash’s former, wildly popular duo Zeb and Haniya played at the Pakistani Embassy as part of a US tour. The two hit it off, and they started trading ideas and links. When Bangash had a performance at NYU in Abu Dhabi, she invited Michael to collaborate. They spent hours listening to worn cassettes together, sessions that led them to songs like “Haatera Taiyga.” “Everyone started dancing to it,” Bangash recalls. “They couldn’t stop.”

Yet this was more than an exercise in crate-digging by two cosmopolitans. Sandaraa has channeled some of Bangash’s extensive training in khayal classical singing with Ustad Nasiruddin Saami and her early encounters with music, songs sung by relatives, songs that filtered through the fabric of a shamiyanas, the colorful tents set up for weddings and festivities.

“A lot changed in South Asian music, and recorded folk music, with equal temperaments and the influence of All-India Radio. But I heard this music live and it sounded very different” recounts Bangash. “I remember standing behind the shamiyana and playing with my cousins, when I heard ‘Bibi sanam janem’ and had to stop and listen.” The song stuck with her, so much that she wound up singing it on Coke Studio, Pakistan’s long-running, obsessively followed music TV show. It became a hit, but it had moved away from its source, from that moment behind the tent.

Then she and Winograd found a version from Afghanistan, from a Navruz (New Year’s) festival, that brought it all back to Bangash. “It had that vibe, that temperament,” she recalled. “When everyone at home heard Sandaraa’s version, they marveled that there was an authenticity to it. My family was moved.”

Engaging with and arranging these songs has channeled some of Winograd’s own experience, as a seasoned klezmer player with serious avant and traditional chops. He has played with major classical figures (Itzhak Perlman), Jewish music mavericks (Frank London, Budowitz, Klezmer Conservatory Band), and Yiddish revival mainstays like Socalled and The Painted Bird, as well as spearheading his own projects.

Winograd has no illusions about Sandaraa’s identity. “As a band we’re steeped in Western technique and theory,” Winograd states. “We have thought about the ideal show we’d like to present, about how folk songs can work when we play them as a group,” a band that includes a violinist steeped in Turkish tradition (Eylem Basaldi), respected jazz players (percussionist Richie Barshay, best known for his work with Herbie Hancock, and bassist David Lizmi), an accordionist-mainstay of the klezmer scene (Patrick Farrell), and an exploration-loving guitar and oud player, whose lines capture the plunk and grit of the Pashto rubab (Yoshie Fruchter).

“The way ‘Dilbarake Nizanin’ came together reflects the challenge,” explains Winograd. “It had the elements, like nice melodies, but it took a while to find how to make it stand on its own. What’s nice is that you have these slow melodies, melancholy and then these fast instrumentals that bring the energy up.”

Arrangements hook into the unexpected shared sensibility between klezmer and Baluchi music, resonances neither Bangash or Winograd anticipated. Both born at the overlap of several cultural sphere, inflected by diverse influences, these sounds from the hem of old empires have a certain intention and certain technical moments in common. That said, Winograd feels, “It’s not just the notes and music. The choices are cultural as well as musical in nature. We understand the concept that this isn’t a surface choice.”

Diving beneath the surface doesn’t mean remaining beholden to tradition. Sandaraa’s hybrid nature spurs the musicians listen in a different, intense way to the source material. “Because of our awareness that we aren’t traditional, we have a deeper engagement with the song itself and with one another,” says Bangash. “We’ve been really teasing stuff out of the material.It’s made me reconsider things I thought I understood, to play and listen with people who are trying to grasp.” The results feel remarkably organic, even as they challenge the standard approach to South Asian folk music.